Book here on our official website and get now the best rate with free cancellation! Enter the dates of your stay and check! This rate is available by booking only on this site. 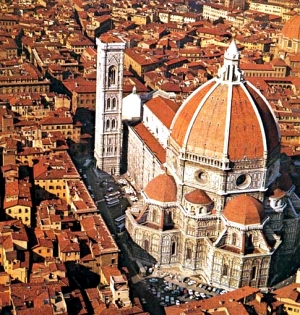 Six centuries of work have gone into the history of the Cathedral or Duomo of Florence.
The original project was designed by Arnolfo di Cambio at the end of the 13th century while the cupola which has made it a symbol of Tuscany was created by the artist Filippo Brunelleschi, a renound artist of the Renaissance period.

The facade however, that completed this magnificent work of architecture was carried out as late as the 19th century. Enriching the history of this monument was a series of both exterior and interior interventions both decorative and structural.
The construction of two sacresties early on to the 16th century marble floors, from the execution of the sculptures to the frescoes signed by Paolo Uccello, Andrea del Castagno, Giorgio Vasari and Federico Zuccari (the Last Judgement in the cupola).
The seat of the bishopric, this Cathedral was third and last to be built in Florence in 1412 and given the name Santa Maria del Fiore or "Holy Mary of the Flower" in allison to the lily symbol of the city.

The Duomo was built on the top of Florence's second Cathedral, Santa Reparta, when in 1293, the Florence Republic decided to replace this church with a larger and more magnificent cathedral and were also willing to fund its construction and therefore Santa Reparta was later demolished in 1375. A large part of the remains of this church can be seen today in the archeological area underneath the Cathedral. The costs however were also expected to be partly contributed by the population itself. A tax was put on all last wills and testaments which was in turn put towards the construction of the Cathedral.

In 1294 the project was ultimately assigned to Arnolfo di Cambio and the first stone was ceremoniously laid by him on September 8th, 1296. Head Architect of the City Council, Arnolfo was already revolutionizing the Franciscan basilica of Santa Croce.
The basilica was indeed of grandeur with three wide naves that meet in the vast chancel where the high altar stands and surrounded by the "trefoil" shaped tribune on which the cupola rests. Arnolfo spent his last years working on completeing the two bays and the new facade whìch were only finished halfway.

Like that of the Baptistery, the diameter of the Dome was projected to be 45.5 meters. . Arnolfo worked on the Cathedral up until his death in 1302 but four years earlier had already begun work on the construction of Palazzo Vecchio as well.

After the death of Arnolofo, the work grounded to a halt. In 1334 Giotto was named to oversee further construction but died shortly after in 1337. Most of this time was dedicated to the building of his Belltower. Work was then succeeded by Andrea Pisano, author of the South Doors of the Baptistery, up until 1348 when the terrible plague reduced the population in half from 90,000 to 45,000. The Belltower was finally completed in 1359 after 10 years of work overseen by Francesco Talenti.

In 1360 a new project was begun with the collaboration of Giovanni di Lapo Ghini. The project saw the division of the center nave into four square bays, with fewer windows than the original design by Arnolfo, and with two lateral bays. By 1370 the project was already well advanced, although Giovanni di Lapo Ghini had left, and a new project for the apse to amplify Arnolfo's "trefoil". In 1375 Santa Reparta was taken down which indicated that Santa Maria del Fiore was now ready to be the new cathedral of Florence. Many year later when Grand Duke Francesco I de'Medici decided to construct a new facade in 1586, the sculptures then found on the existing facade, some of Arnolfo himself, were dismantled and transferred to the Museum of the Opera inside the Duomo.